Duke & Duchess of Sussex sold on spirit of the age.

Brexit Will Happen on Halloween 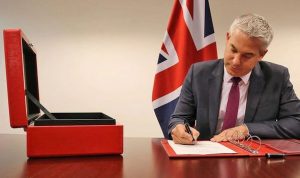 Over the weekend, Rt Hon Stephen Barclay MP made absolutely sure Brexit will now happen on 31st October, come what may.

The BBC did not highlight the story and nor did the Remain-supporting Guardian. Perhaps they reckoned their readers would not like the story.

It was left to the Brexiteer Daily Express to headline the event. The paper reported:

‘The Brexit Secretary signed a commencement order to bring the UK out of the European Union in a landmark do or die pledge’.

Withdrawal Act 2018 now all in force

The commencement order brought all the European Union (Withdrawal) Act 2018 into force. MPs voted the Act through last September. Section 1 says simply: ‘The European Communities Act 1972 is repealed on exit day.’  ‘Exit Day’ was originally 31st March 2019. However, after Mrs May’s two extensions to Article 50, it shifted to 31st October.

The European Communities Act was the 1972 legislation which enabled laws from EU rulemakers to be installed automatically in the UK. It took the UK formally into the EEC, Euratom, and the European Coal and Steel Community.

Its repeal under Section 1 of the 2018 Act means the UK will directly control our policies from 1st November 2019. Existing laws made at the behest of the EU will remain in force until specifically repealed. But no new EU laws can apply to the UK starting from All Saints’ Day.

The very last section of the 2018 Act laid out the conditions for its Section 1 to come into force.  It simply said; 25 (4) ‘The provisions of this Act, so far as they are not brought into force by subsections (1) to (3), come into force on such day as a Minister of the Crown may by regulations appoint; and different days may be appointed for different purposes.’

In other words, some sections of the 2018 Act, dealing with preparations, came into force immediately. Section 1 was a key provision which needed a Minister of the Crown to bring into force.

Theresa May refused to let Mr Barclay sign the order.

No further extension past Halloween

Boris Johnson has given the go-ahead, and immediately tweeted his pleasure at the move.

He tweeted: “We are leaving the EU on October 31st. The signing of this document means we will take back control of our laws on Brexit day.”

Signing the Order means there cannot now be any further extension to Exit Day. As Steve Baker MP said: “It is absolutely totemic. It shows a transformation in the approach, that Boris Johnson is willing to leave on a fixed date with no question of extension. It’s the do-or-die pledge in black and white. It’s not merely symbolic.

“Once it’s signed that’s it, the UK is leaving. Theresa May did not bring the repeal of the European Communities Act on a fixed date because she was always willing to extend.”

Meanwhile, Remain MPs were seen squabbling over the weekend about who if anyone could form an alternative ‘government of national unity’ in the event that Boris Johnson’s administration loses a vote of no confidence in September.

The BBC love all the Remainy gossip.  So they reported at length on the latest stupidity.  Jo Swinson MP, who is the leader of the Liberal Democrats (14 MPs) put forward two veteran MPs. Either the longest-serving man or woman could become Prime Minister, she said. They are Kenneth Clarke and Harriet Harman. Kenneth Clarke jumped at the idea, but there has been no discernible word from Ms Harman.

However, Jeremy Corbyn made a not unreasonable response.  ‘Under normal constitutional processes in Britain, when a government collapses, the leader of the opposition is called on to form a government.’
It was ‘not up to Jo Swinson to decide who the next prime minister is going to be’, he added.

Psalm 2:4 He that sitteth in the heavens shall laugh: the Lord shall have them in derision.

No one to form an alternative

It all means if a vote of no confidence is carried, there will be no-one else able to form a government. Under the rules of the Fixed-term Parliaments Act 2011, if there is no successful vote of confidence in a government within fourteen days of a successful vote of NO confidence, a general election must be held.  The Prime Minister decides the date. No 10 has said it would be held in early November, after ‘Exit Day’.

But could a vote of no confidence succeed? With a majority of just one, it only needs one Conservative MP to vote with Labour, or two to abstain, for the vote to carry and the fourteen day countdown to start.

However, any Tory MP not voting with the whip against that motion would never stand for the Tories again. It would an act of political suicide, ‘taking one’ for the Remain team.

The UK will leave the EU on Halloween

But a similar calculation might be done on the other side by Brexiteer Labour MPs like Kate Hoey.
Moreover, there are 15 Independent MPs and 5 TIG (ChangeUK as was) MPs. Voting intentions for the latter now put them on 0% in the polls.

We’ll leave comment on the No Deal scare report which also came out over the weekend to another day. The end result of the weekend’s events is the United Kingdom will leave the European Union on on All Hallows E’en 2019. Don’t expect any agreement with the EU by then. Even if there were, Jacob Rees-Mogg is a savvy Leader of the House. He is unlikely to put before the House any motion on a withdrawal deal which could be highjacked and amended by Remainers.

For five months now I have been saying No Deal is inevitable. This weekend has not changed my mind!  But keep praying in any case!