News round up including: Dramatic rise in children as young as three self-harming

George Soros ‘There to make money’ 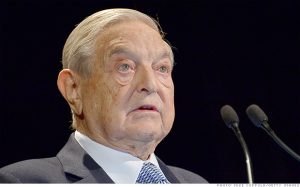 Globalist financier George Soros provided funding for anti-Brexit Avaaz and has destabilised nations all over the world while pushing an anti-Christian agenda in Africa.

American billionaire George Soros gave a pro-EU campaign half-a-million pounds through his foundation, according to news outlets. (Note, all our links open in a new tab automatically).

Meanwhile, we have uncovered a video in which the financier shows a breathtaking lack of humanity and remorse.  See below.

The Best for Britain campaign, which unashamedly advocates snubbing the Brexit referendum and remaining in the EU, received £400,000 from Soros-funded Open Society Foundation since the June 2017 election, sources told the Guardian.

Gina Miller founded Best for Britain.  She took the UK government to court over the triggering of Article 50. The campaign is chaired by Lord Malloch-Brown, a leading political insider. Ignoring the 2016 Referrendum result, he says, ‘We, like millions of people, believe that Britain should lead, not leave, Europe.’ ‘Leading Europe’ is of course impossible for the UK or any other nation. The un-elected Commission, a self-perpetuating oligarchy, runs the EU.

Best for Britain’s CEO Eloise Todd said the group has ‘only one aim – to stop Brexit and do what’s best for Britain’.  However, after touring European capitals in the spring of 2016, I concluded what is ‘best for Britain’ is to leave the EU’s revived Roman empire as fast as we can.  This page on our website looks at the EU’s spiritual dimension and provides links to the videos.

George Soros made £1bn from the UK taxpayer 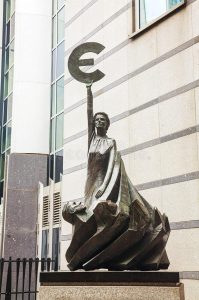 This scary sculpture of a woman holding the Euro aloft while men grovel at her feet is outside the EU Parliament building in Brussels.

George Soros made more than £1bn at our expense by betting against the pound on Black Wednesday in September 1992. By the grace of God his actions forced the British government to pull out of the European exchange rate mechanism. That decision in turn kept the UK from joining the Euro, so some good came of it.
Recdently, Mr Soros has made no secret he believes holding the EU referendum was a ‘fatal error’. The billionaire has refused to ‘butt out’ of the debate. Last week he pledged yet another £100,000 to Best for Britain.

He said: ‘Prior to Brexit, Britain enjoyed the best of all possible worlds. It was a member of the European Union without adopting the Euro.

‘Britain, outside Europe, will lose much of its global influence. Economically, Britain will suffer because 45 years of successful integration with Europe will go into reverse.’

But the Independent reported his real fear just after the 2016 referendum. Firstly, George Soros is terrified the EU will break apart after a successful Brexit and he will lose his influence over European affairs.   Last year we reported on the influence George Soros has amongst MEPs.  Financially he could be disadvantaged as well.

Secondly, the financier revealed another aspect of his thinking in this quote:

‘To make matters worse’, he said, ‘the divorce process will preoccupy both Britain and Europe for years ahead, when they should be uniting to resist external enemies like Putin’s Russia and resolve the internal contradictions that made some people regard the EU as their enemy.’ 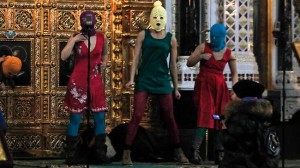 Members of “Pussy Riot” staged a foul-mouthed tirade in a Moscow Cathedral. George Soros put up money for it.

George Soros hates Russia.  Under Vladimir Putin the country has been returning to its Orthodox Christian heritage.   It is Russia, not the West, which defends Christian minorities in the Middle East.  We denounced the blasphemous Femen group and its Pussy Riot desecration of  a Moscow Cathedral here.  We also reported on them and on Moscow banning a homosexual parade.  And who is now the world’s biggest funder of pro-homosexual NGO’s worldwide?  The same man whose foundations, together with the US government, funded Pussy Riot and Femen?  Click here to see if you guessed right!

Mr Soros is also talking up the alleged threat from Russia for financial reasons.  Peace with Russia would remove the need for vast armies to be facing each other making money for armaments manufacturers.

The Panama Papers leaks, ironically funded by Soros, inadvertently revealed his links to the secretive Carlyle Group which invests heavily in armaments.

Other leaks show Soros maipulating news, whilst working against Russia and shoring up Hilary Clinton.

Ex-CIA director James Woolsey has even admitted the US has interfered in elections in the past, but “only for a very good cause,” and when they thought rigging the vote would benefit democracy.  See here.

Mr Soros founded the Open Society Foundation. Recently he announced he was giving all his wealth to the Foundation. Ostensibly Open Society promotes democracy and open accountable government around the world.

However, Open Society has a history of interfering in the internal affairs of sovereign nations. Its activists promote the causes of feminism, sodomy and abortion throughout Africa and Asia. The Soros front funded the so-called Arab Spring uprising.

The billionaire helped set up Avaaz, the clicktist anti-Brexit eco-warrior group.  Avaaz sent agents into Syria with propaganda and communications equipment. Their involvement helped start the Syrian civil war, with help from the US and the UK.  That displaced tens of thousands of people, the majority of the Muslims, who then flooded into Europe.  Naturally, George Soros is all for Europe welcoming the Islamists in with open arms.  Although Hungarian-born, he hates the Hungarian government for refusing to take the anti-Christian migrants in.

Soros also collaborated with the EU to fund the Maidan Square trouble in Kiev. The uprising drove Ukraine’s elected but pro-Russian president from power. The resulting violence has left people dead, businesses ruined and Ukraine in turmoil. The eastern Russian-speaking minority turned to Moscow for help. Gleefully, the EU then blamed Russia for the instability it started itself.

Even today at the Munich Security Conference all the talk is about Russian ‘meddling’. It should be firstly concerned with protecting civilian populations from Islamic terrorists. Secondly, it should be promising to end the interference by the US, UK and France in the Middle East. It is that, after all, which led to the rise of Al-Qaeda and then to ISIS. And that is not even to suggest those Islamist organisations were set up with Western encouragement in the first place.

Finally, we shall make one thing very clear.  The fact that George Soros is Jewish does not make exposing the evil he does ‘anti-Semitic’.   Theresa May’s former chief of staff, Nick Timothy, has picked up on the same donation as we have here.  He has been accused of “peddling textbook anti-Semitic tropes” in a Telegraph article he wrote.  The accusations have come from Bonnie Greer and Owen Jones.  Both are quite happy with the anti-Christian amoralism of George Soros as well as his anti-Brexit credentials.  But at least Owen Jones is pro-Jewish.  Bonnie Greer is boycotting Israel.

Finally, as trailed at the top of this article, and thanks to the off-Guardian website, we can see an extraordinary interview with George Soros.  The interviewer challenges him on the social implications of betting against national currencies and driving millions towards poverty. This is his response: ‘I am basically there to make money. I cannot and do not look at the social consequences of what I do.’ Watch this astonishing video here.

Everywhere Soros becomes involved, destruction, death and degradtion run riot. Sometimes he makes money from the turmoil. At other times it is merely his hatred of Christianity and his fanatical obesesion with advancing democracy and perversion which drives him. We must pray fervently that his works are exposed and brought to ruin.

But let us also pray with compassion for the man himself. Pray he repents at finds salvation in the Lord Jesus Christ even at this eleventh hour of his life. He may never be able to undo all the evil he has set in train, but at least one soul would be saved from the fires of hell.