News round-up including: Woman asks for female nurse but gets transsexual male 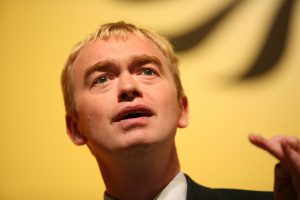 Tim Farron has said he regrets saying he did not believe homosexual sex was a sin during last year’s general election.

During the six-week long campaign, he was asked repeatedly about his religious beliefs and, specifically, about whether he believed gay sex was a sin.

After initially appearing not to answer the question directly, he said he did not want people getting the ‘wrong impression’ about his views, telling the BBC ‘I don’t believe that gay sex is a sin’.

But yesterday, the ex-Lib Dem leader told Premier Christian Radio he had been ‘foolish and wrong’ and had spoken partly to try and get the issue of his faith ‘off the table’.

The committed Christian said the focus on his beliefs stopped him getting his message across during the campaign.

‘It was a little bit like having your main advertising hoarding permanently damaged and vandalised,’ he said.

Mr Farron stepped down as leader of the Lib Dems after last year’s election. He is now his party’s environment spokesman.

But in an interview yesterday with Premier Christian Radio, he said he now regretted not being honest with himself at the time. Furthermore, he admitted his answers had been motivated, partly, by political expediency.

Asked whether he had felt under pressure to deal with the issue while touring the country, he replied: ‘The bottom line is, of course, I did.’

‘There are things – including that – that I said that I regret. There was a sense I felt I had to get this off my table: here’s a general election, a great opportunity for the Liberal Democrats… and all they wanted to do was talk about my Christian beliefs and what it meant.’

‘I would say foolishly and wrongly, [I] attempted to push it away by giving an answer that, frankly, was not right.’

Part of the difficulty he said he found himself wrestling with was the different understanding of what sin constitutes for Christians and non-Christians.

‘In the end, if you are a Christian you have a very clear idea of what sin is. It is us falling short of the glory of God, and that is something all of us equally share.

‘So to be asked that question is essentially to persecute one group of human beings because sin is something, Jesus excepted, we are all guilty of. But if you are not a Christian, what does sin mean? It is to be accused of something, to be condemnatory, and so we are talking different languages.’

Reflecting on his experience, he said he did not believe there was ‘a wicked agenda’ to marginalise or ridicule Christians.  Nevertheless, there was a risk of society becoming ‘tolerant of everything apart from the things we don’t like’.

He added: ‘There are some who just can’t comprehend that somebody can have really strong convictions and be a Bible-believing Christian on the one hand and at the same time really passionately believing in people’s rights to make their own choices, which essentially is what liberalism is.’

Our only point of difference with Mr Farron is over his belief that his faith should not colour his political views. That is a form of pietism.  It stands in contrast to a theonomic view that God makes laws, not man. For example, Jacob Rees-Mogg holds, with Tim Farron, a scriptural view on the sinfulness of sodomy. But Mr Rees-Mogg voted against gay marriage. Mr Farron voted for it.

Nevertheless, we give Tim Farron great credit. He did wrong, he has admitted it. And full credit also to Premier Christian Radio for giving him a platform. Ours is not an army which shoots its wounded. His humility and repentance should encourage us all to stand full-square on the rock of faith, trust the word of God and proclaim the truth.

In addition, we know where Tim Farron stands.  He has made himself perfectly clear. The one who comes out with no credit at all is Vince Cable, current leader of the LibDems.

@vincecable tweeted: ‘I strongly disagree with @timfarron’s personal views expressed today. @libdems have a long & proud record of fighting for #LGBT+ rights: campaigning to repeal section 28, equalising age of consent and legislating for equal marriage. I will continue to champion rights and dignity.’

Is Mr Cable stupid or just being deliberately obtuse? Tim Farron voted for all those things. He may well have been wrong to do so, but he did.

Back in November 2017, Mr Farron gave a speech to the Theos think tank. He said devout Christians are seen as ‘dangerous’ and ‘offensive’ in modern Britain.

Tim Farron said the idea that there was a ‘unifying set of British values’ was a ‘myth’.

The MP for Westmorland and Lonsdale said: ‘If you actively hold a faith that is more than an expression of cultural identity you are deemed to be far worse than eccentric.

‘You are dangerous. You are offensive,’ he said.

‘Being homosexual’ not a sin

We want to be very clear that ‘being homosexual’; in the sense of suffering from same-sex attraction, is not a sin. It is pathological and may keep someone from full communion with the Almighty, but ‘being’ that way inclined is not a sin. It is doing homosexual acts which is sinful and dwelling on them ‘in the heart’.  There is such a fine line between temptation and sin, but temptation as such is not sin.  The Lord Jesus experienced temptation, but never sinned:

Heb 4:15 For we have not an high priest which cannot be touched with the feeling of our infirmities; but was in all points tempted like as we are, yet without sin.

Many of those who suffer same-sex attraction have been abused and then identify with the aggressor. A boy molested in a children’s home, for example, can then grow up thinking he is homosexual and experience those same desires.  He needs the forgiveness of Christ, as we all do, but he also needs healing and probably deliverance.  That being said, the word of God says plainly:

Lev 18:22 Thou shalt not lie with mankind, as with womankind: it is abomination. 23 Neither shalt thou lie with any beast to defile thyself therewith: neither shall any woman stand before a beast to lie down thereto: it is confusion.

Lev 20:13 If a man also lie with mankind, as he lieth with a woman, both of them have committed an abomination: they shall surely be put to death; their blood shall be upon them.

Moreover, we read in the words above that homosexual activity is an abomination. Verse 22 is the only time that word is used in Leviticus 18 and verse 13 the only time in Lev 20. The Hebrew word is ‘To’ebah.’  It means morally disgusting.

(By the way, the word for shellfish and other unclean foods, also unfortunately translated ‘abomination’ all through Leviticus chapter 11 in the King James Bible, is the Hebrew word sheqets.’ Sheqets just means ‘dirty’. Not that homosexual acts aren’t dirty as well as being an abomination. But the Bible doesn’t say that. We digress. But we see the difference.)

In response to those homosexuals who snarl, ‘So I’m an abomination, am I?’  we need to say having same-sex desires itself is not an ‘abomination’.  Nor is any individual homosexual ‘an abomination’. That is, not until their doing becomes their being. There comes a point where your day-to-day sinful activity defines you. And we have to say that promoting such activity to school children is an abominable thing to do as well.

Moreover, I strongly believe that such depravity in mind or body provides an open invitation to the demonic.

Many people think Leviticus, or even the story of Sodom in Genesis 19, is the first time God speaks about human sexuality. But it isn’t. The Creator’s plan is for humanity to be formed around the societal institution of heterosexual love and marriage is revealed in the first two chapters of the first book of the Bible. In Genesis we read:

Gen 2:23 And Adam said, This is now bone of my bones, and flesh of my flesh: she shall be called Woman, because she was taken out of Man.  24 Therefore shall a man leave his father and his mother, and shall cleave unto his wife: and they shall be one flesh.

The Lord Jesus brought these two scriptures together in his answer to the Pharisees:

Mark 10:6 But from the beginning of the creation God made them male and female.
7 For this cause shall a man leave his father and mother, and cleave to his wife;
8 And they twain shall be one flesh: so then they are no more twain, but one flesh.

We need to bring in some good news at this point.  Yes, we know there are many routes into homosexuality, which we might define as an inability as an adult to relate emotionally and sexually to a person of the opposite sex.

Homosexual activity is sinful.  Nevertheless, it is not an unforgiveable sin.  Jesus Christ went to the cross so that all sinners might be forgiven.  Furthermnore, the indwelling Holy Spirit, there for every believer, can heal and deliver.

So however someone became gay, they do not have to stay gay.  There is a way out.  Christ’s shed blood wipes away the stain of sin and releases believers from the power of sin.

It is do-able. Many men and women have walked away from homosexuality after realising that it was never God’s plan for their lives.

Why are the godless bothered?

Why is anyone who is not a Christian bothered about whether Christians believe homosexual activity is sinful in the eyes of God?  To put it another way, why are we ‘dangerous and offensive, as Tim Farron suggests?

I suggest it may be because:

1 They are deeply intolerant of any view but their own,
2 They are totalitarian, wanting to impose their views on others,
3 Maybe they are worried God might exist and be right,
4 They know deep down what they (or homosexuals) are doing is wrong,
5 We challenge and disturb their cosy world,
6 The thought there is one higher than them to whom they are responsible annoys and terrifies them,
7 Because from sodomy being a sin to sodomy being a crime is just one theonomic step away.

Nevertheless, no atheist should be at all concerned that I and however many others think buggery and gross indecency should be re-criminalised and recent laws repealed in this respect. We are a long way from the corridors of power.

The traffic is all in the opposite direction. Children are being taught that sodomy is just great and the Government even want to increase the propaganda level. The Government want people to be able to change their God-given gender at will.

I, and our wonderful Christian Voice members, are just a voice crying in the wilderness, calling for national repentance, urging Christian to pray, and pointing out that every previous society which has passed this way has gone down the rubbish chute of history.

Moreover, every previous civilisation which allowed its family base to crumble and institutionalised sodomy has been conquered by a stronger, self-confident, monogamous culture.

Now, where would we look for one of those on our doorstep today?